Kate & Joshua have a beautiful love story, filled with magical moments and so much Disney World tales, just the way we like it. Like a fairy tale, dreamy and unique one.
They will be getting married this upcoming October at the St. John the Evangelist Roman Catholic Church in Downtown Frederick. We are so excited to be their love story teller. Check out their beautiful interview, I love how much detail they put into it, makes me feel like we have been friends forever now! We are so excited for your wedding coming up soon!

Daysy: How did you meet?
Kate: At work, when we both worked in the Wonder Book and Video warehouse. I was in high-anxiety mode for the first few days, and I was dating someone else at the time.
Josh: We met at the Wonder Book and Video warehouse. The manager introduced Kate and two other new people to all of the employees. She seemed friendly at the time. And in case you are wondering, I didn’t have anything to do with her breaking up with her ex. And I wasn’t waiting on the sidelines for my moment to pounce. I asked her out maybe a year or so later.
Kate: Yeah, I was near the end of that relationship already, and we’re both still friends with him. It was more or less a mutual thing when we broke up, and I was single for a while before Josh asked me out the first time. 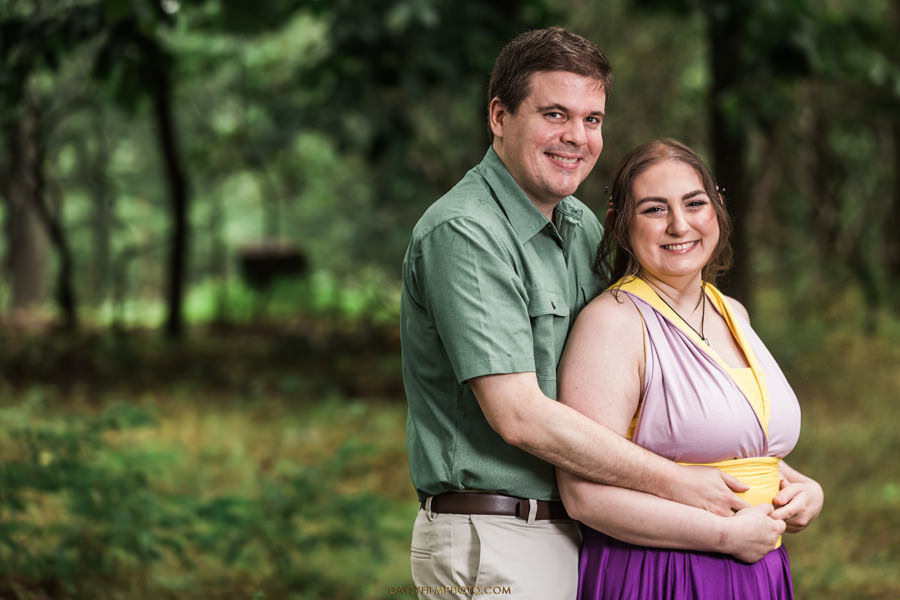 Any special song?
Kate: “I See the Light”, from Tangled. It’s going to be our first dance. I was never really a “Disney princess” as a little girl, but I really connected with Rapunzel when the movie came out. Particularly in regards to her hair. My mom wouldn’t let me cut it shorter than below my shoulder blades when I was a kid, and three days into my freshman year of college I got twenty-six inches taken off all at once. It was liberating. I’ve been letting it grow long for the wedding, and part of me wants to see how long I can let my hair get before I think about shaving my head again, like I did two years ago.
Josh: Yes. “I See the Light,” from Tangled. But it goes deeper than that for me. See, I was actually very intimidated by Kate when we first went out. Even though I had asked her out, I realized how out of my depth I felt with her at first. Perhaps I wasn’t ready mentally or emotionally. We didn’t become a couple until a few years later.You could say I was a bit like Flynn (or Eugene if you’re going to be a nerd about it) from Tangled, looking for happiness in all of the wrong places. The thing is, Kate was always there, always waiting. She always liked me. And when, eventually, she built up the courage to ask me out the next time around, yes, I was still scared, but I also knew that I wanted to be with her more than anything else. You could say that I saw the light in that moment. I know, I know, it’s cheesy, but it’s true. 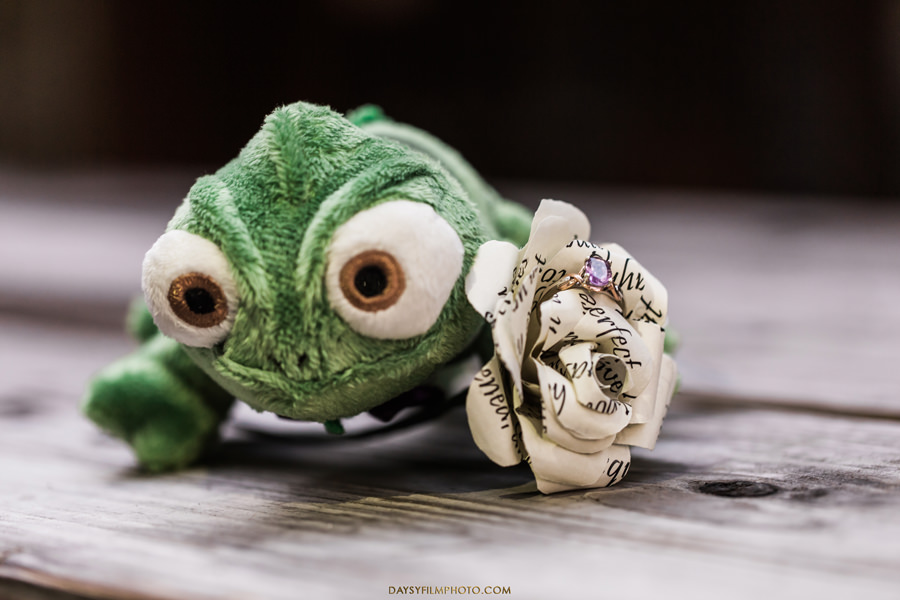 Josh, When you saw her, Kate seemed….
Josh: Scared. Kate had a big smile on her face, but it was a bit forced, it said, “Please don’t eat me.” It was her first day at work, after all, and she looked at everyone that way, so I made sure I was nice to her.

Describe your relationship in two words:
Kate: THE BEST.
Josh: I can’t think of a better way to phrase it.

Are on your plans having children?
Kate: One of these days, we will have some mini-mes running around. But it’s hard to think about that right now with the virus.
Josh: Small versions of us? Or worse: small combinations of us? People of the world, beware the weirdness headed your way. But yes, definitely need to wait and reassess things after this pandemic. I would like kids. Eventually. 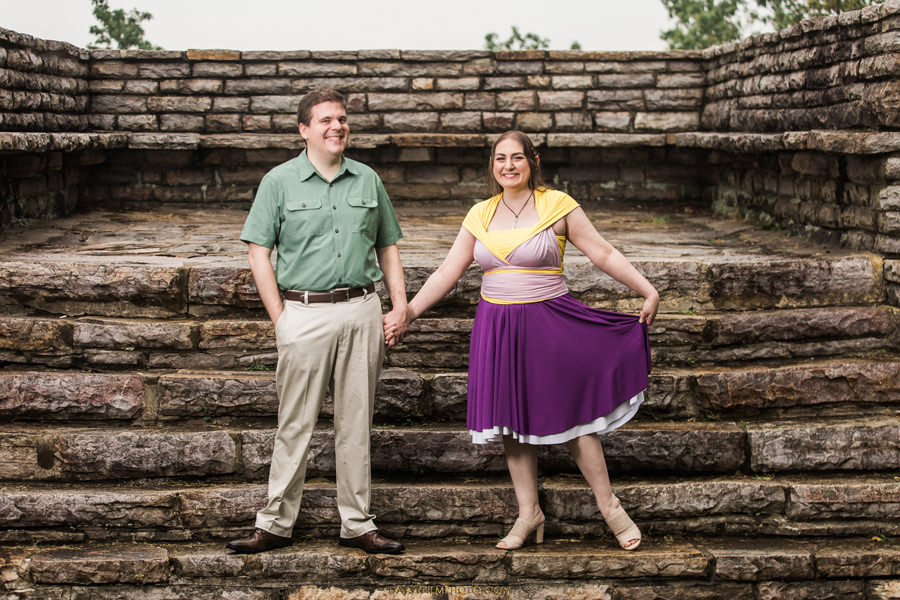 Kate, When you saw him, Josh seemed….
Kate: Friendly, and quite silly. He used to pretend he was going to ram his book cart into mine, and I usually obliged in playing “chicken” with him, knowing neither of us would actually crash our carts.

How did he propose? Can you describe that moment?

Kate: Our first vacation together, Walt Disney World. I’m a former Cast Member, and it was his first trip ever. He proposed on our first day in the parks, in the Magic Kingdom, in front of my all time favorite attraction: The Haunted Mansion. There’s a photo spot right in front, just after the ride exit, and the Disney photographer took some forty-odd pictures of the moment. My shirt was quite appropriate for the occasion: “Best. Day. Ever.”

Josh: We went to Disney World on a vacation, luckily BEFORE this pandemic struck. Her best friend told me that her favorite attraction was the Haunted Mansion. Heck, her friend didn’t even need to say anything. Kate talked about the attraction all the time. I knew there was an area to get photos taken after the ride. I did not enjoy it the first time around, because I kept thinking about the proposal. I was so nervous. It was a beautiful day. I asked if she could hold our stuff for a moment and went to ask the photographer to capture the moment as I was going to propose to this special woman. The first few pics were normal, but as soon as I got down on one knee to propose, Kate, um, well, it looked like she was trying to run away. She cried from the emotion of it, but I felt like all of the breath had been sucked out of me. It was relief and joy. I felt heavy and light at the same time as I put the ring on her finger and we kissed.
It was at that moment we both heard applause, and remembered the large crowd of people waiting in line for the Haunted Mansion were watching us. I had forgotten they existed until that point. It was good attention, though. One man walked up to me and shook my hand, congratulating me.
Kate: Yeah, the queue ran right along the side of the photo spot. It was really amazing, and, well, magical.
Josh: After the proposal, Kate was giddy. Just giddy. She was telling everyone she saw that her boyfriend just proposed to her. I felt like I was walking in a dream, and was glad I could enjoy the rest of the trip with my new fiancee.
Kate: It truly was magical. I think we ended up riding The Haunted Mansion more than five times over the course of our trip. We rode it three times that first day!
Josh: It’s my favorite ride now. One, I love Halloween themed things anyway. Two, I have this perfect memory now. 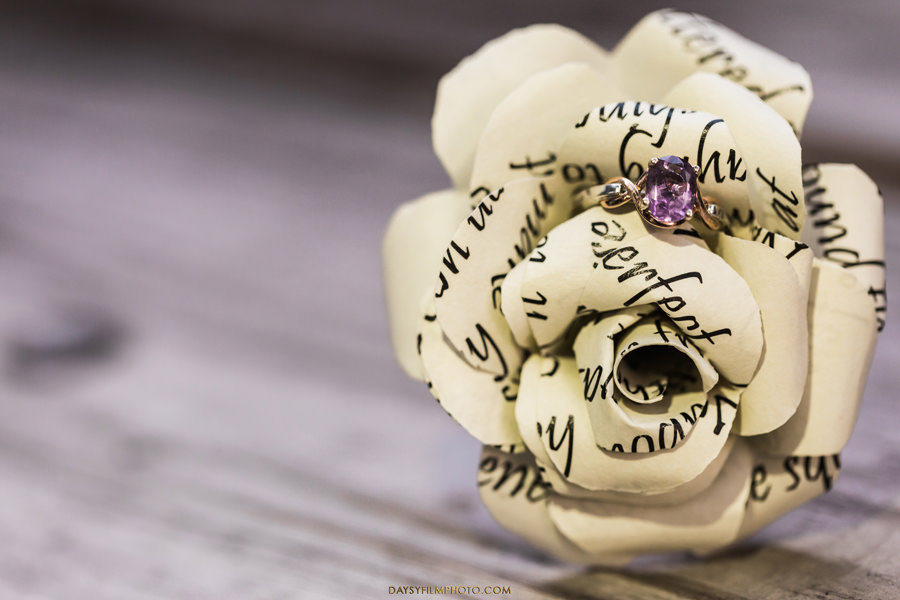 Where did you go for your 1st date?
Kate: Ruby Tuesdays? I think it was Ruby Tuesdays. Unless you’re talking about our first official date, after we decided to be a couple. That was at Manalu, and we went and saw LEGO Batman after dinner. I was wearing a very geeky dress with Harry Potter symbols as part of the pattern.
Josh: Yes, it was Ruby Tuesdays. We sat there for hours talking. It was so natural. Luckily, they did not kick us out, though when it was time to close, we sat outside together and talked some more. Although, our first official date was a Valentine’s date at Manalu. After eating some delicious italian cuisine, we went to the movie theater to see what was playing. I was so relieved when she said she wanted to see Lego Batman instead of something romantic. We had a blast. 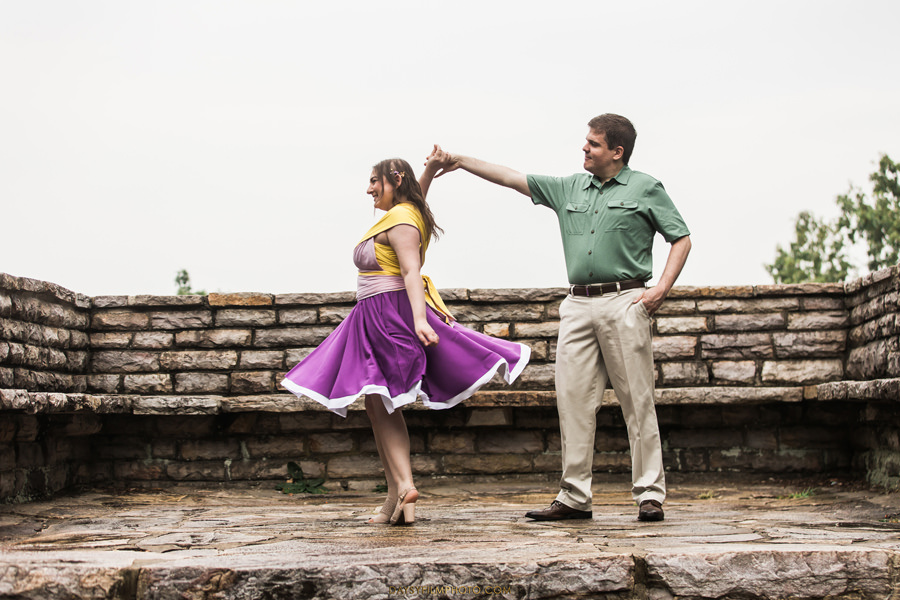 Describe what you most absolutely have in common?
Kate: A quirky sense of humor. Especially things like puns and mondegreens. We’re the same level of weird.
Josh: We are both weirdos and it’s great. We have freedom to be ourselves around each other.

What are some common hobbies/interests that the two of you share?

Kate: I’d say the big one is writing and storytelling. I also dragged him into Dungeons & Dragons, after years of trying to get him to join my gaming group. I think it’s safe to say that I’ve made a Walt Disney World fan out of him too.
Josh: Wow, we have a lot in common, actually. Writing, storytelling, Dungeons and Dragons, gaming. It’s a good thing I liked Disney before we became a couple. I think if I didn’t, it would have been a deal breaker for her.
Kate: Oh, and also food. We both love trying new foods. Just ask him about the Food & Wine Festival and the food at the Ireland kiosk…
Josh: I… may have gone a little overboard. 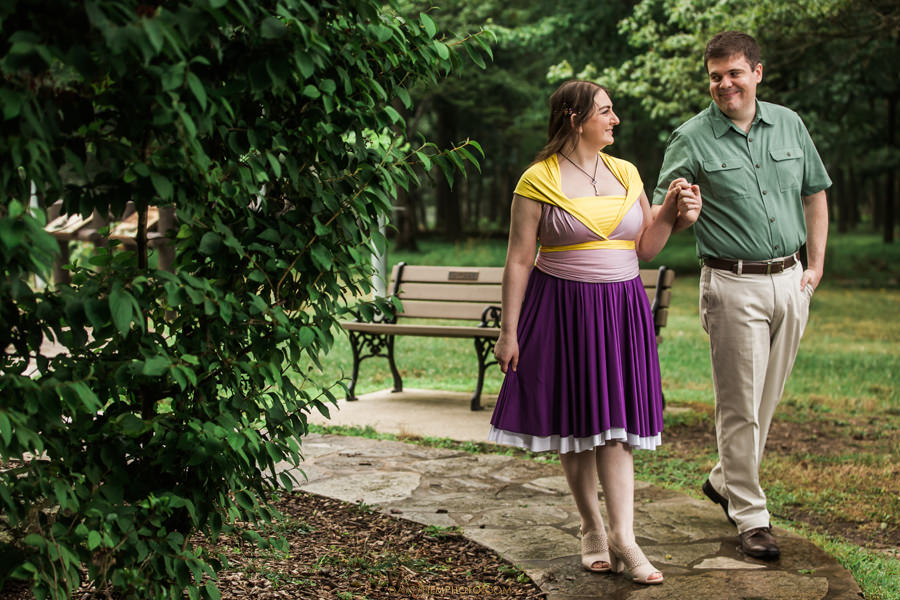 Describe 3 things that you absolutely love about Kate

Only three? Well, that’s fair. We would be here forever otherwise.
– Kate is creative. I think I value her creativity above almost everything. We started writing stories together on a whim, and I did not realize how complete it makes me feel to have someone I can do that with.
– Kate is intelligent. She doesn’t just spout an opinion about something she doesn’t know, she researches it first. She gets me to think outside of the box and look at something from a different angle because of her intelligence.
– Kate is funny. She has a great sense of humor and laughs all the time. She’s got the best giggle. What’s more, she makes me laugh too.

Describe 3 things that you absolutely love about Josh
He encourages me to tell him my feelings, but never forces me to. Basically, he lets me know that I can confide in him when I need someone to talk to, and that I don’t need to be afraid of opening up. I also love how silly he can be, finding all kinds of goofy things to send me, just to make me smile. And I love how easy it is just to talk to him about virtually anything, even things that may not be his favorite subjects. Like musicals (although I’m proud to say he’s pretty much liked most of the musicals I’ve had him watch with me).

Are you planning to honeymoon? If yes, where do you have plans to go to?
Kate: Hahahahaha! Guess. Walt Disney World. Not right away, of course, since things are a little crazy right now with the pandemic, but we will definitely be returning there.
Josh: We are thinking about Disney World again, yes. Until things, um, calm down, I’m hoping just to do a little something small after our wedding
Kate: It will probably involve storytelling in some way. We could be perfectly content just writing a story together. 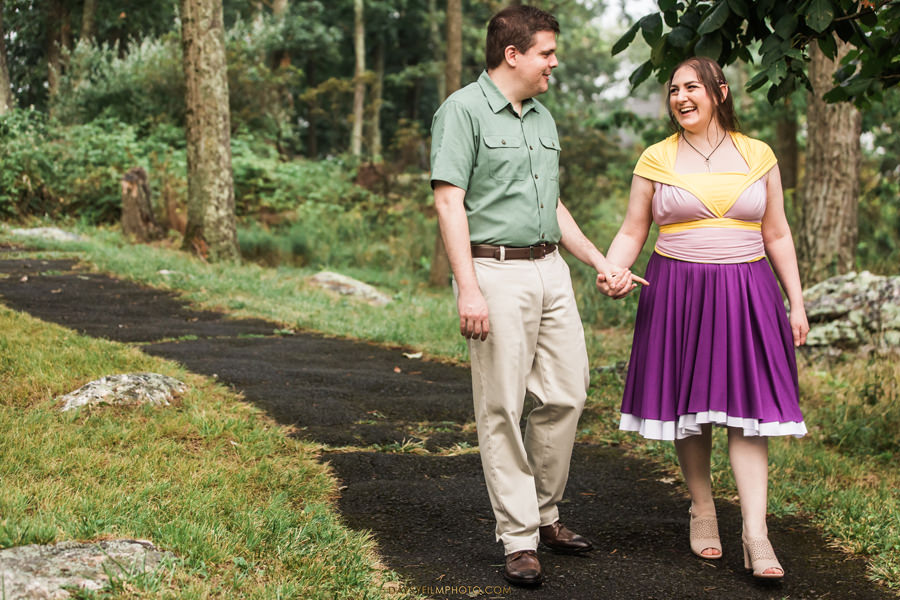 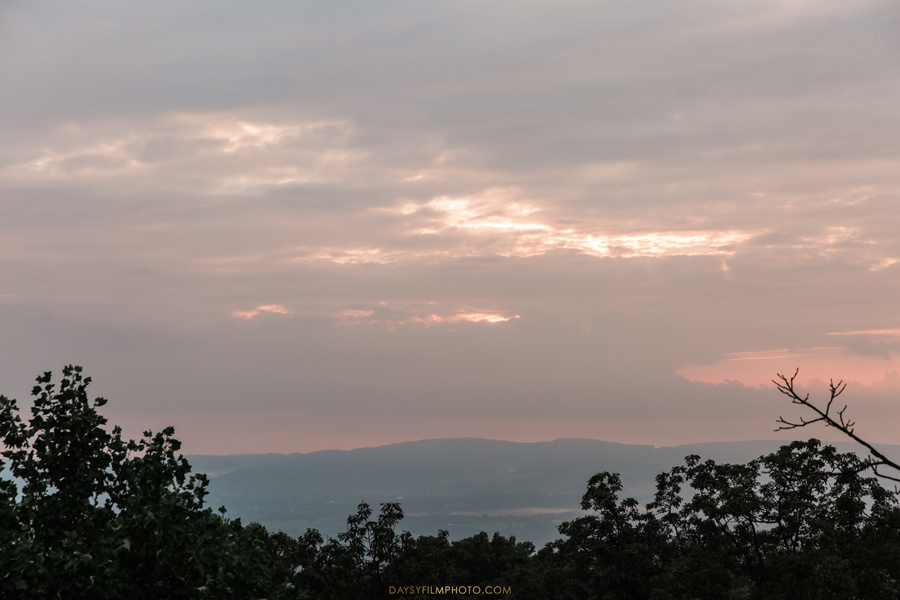 How do you imagine yourselves as a couple from now to 5 years?
Kate: Oh geeze, I have no idea. Right now, everything is just moment to moment, but I hope that we’ll be in a comfortable place, still writing stories together.
Josh: Safe and healthy. Two words I normally didn’t have to think about until this year, and now I think about them constantly. Other than that, happy and writing stories and having fun together.

What was your favorite part of the photo shoot?
Kate: Getting to kiss Josh. It had been 140 days since the last time I had gotten to kiss him because we don’t live together, and limiting contact during this pandemic has been maddening at times.
Josh: I can’t think of a better way to phrase it.

I am glad we could contribute for this last part too! And they went on a date after the photoshoot! Win Win!
Xo,
Daysy

About the Author: daysy